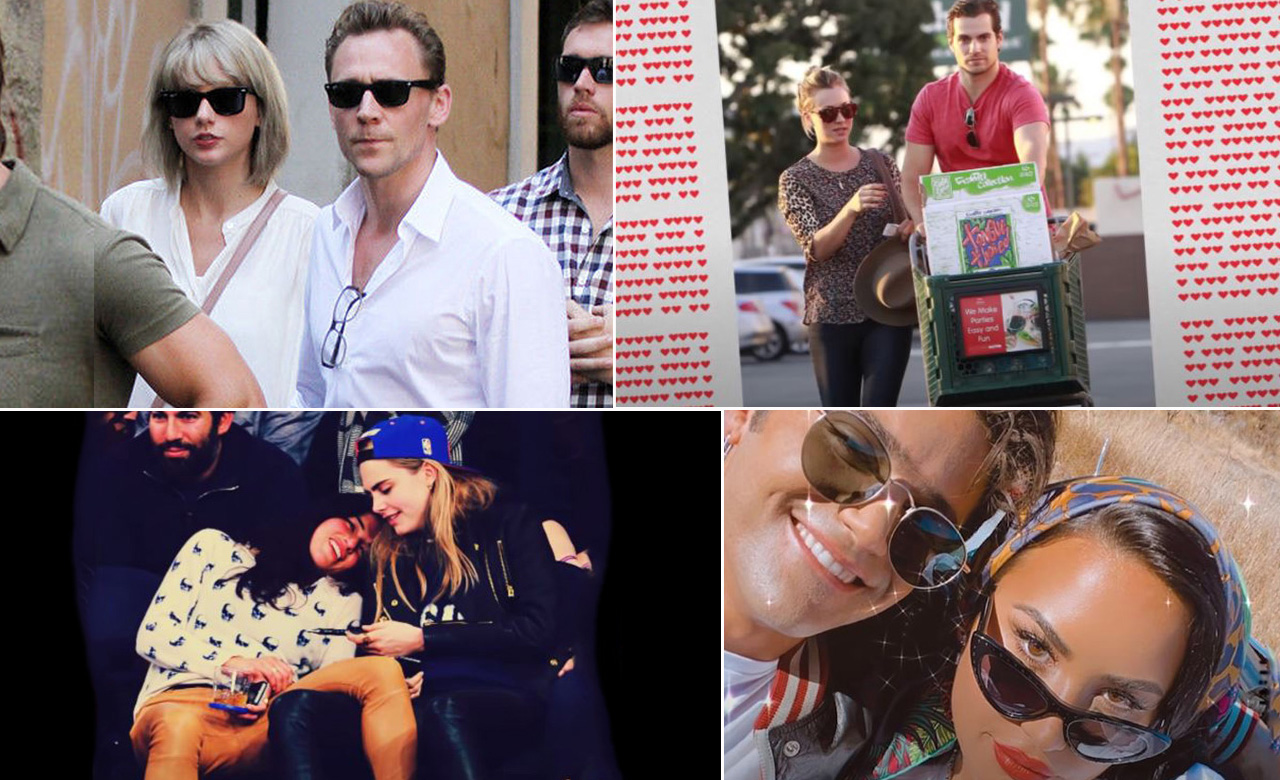 Hollywood is a world full of beautiful and attractive personalities. While some couples are fortunate to have an immediate connection that lasts, there are some who need to find out more about each other. When these matches do not last long, people brand it as just fling or hook-up. While most are not much of controversy, some are pretty interesting that caught the attention of the media. Let us visit these short-time pairings and see to what degree did they take their relationship. Henry Cavill once dated Kaley Cuoco from June to July of 2013. Apparently, what led to their brief time together was Kaley’s public confession of her admiration for the Man Of Steel star. The two of them were photographed holding hands while doing a bit of grocery shopping. It did not last long though, as news broke that they are no longer an item by July of 2013.

Taylor Swift is not a newbie in short-term relationships. Fittingly, Swift swiftly gets on to a new love boat upon her break up with Calvin Harris in June 2016. The surprising part of this is that it is with Tom Hiddleston. The new pair did not last long and their split was shared with the public by September of 2016. It was shocking since Tom Hiddleston has already befriended Taylor’s squad and met her parents. Things between Jennifer and Drake did not last long. In the early days of 2016, the two were spotted spending time together and were thought to be serious about each other, but in just a snap Jennifer and Alex Rodriguez became an item by March 2016.

Although Ben Affleck and Shauna Sexton seemed to have a lot of fun together, the two just had a two-month romance. The couple had their casual trips around the corner and even were spotted at drive-thrus. What started in August 2018 ended in October 2018 – perhaps they are just to be buddies rather than lovers.

The funny girl Rebel Wilson seems to have found romance in 2020. Rebel and Jacob Busch picked up where they left off and started dating in September 2020 after being apart for months due to the current global situation. Jacob became a constant feature in Rebel’s Instagram account and she credits him for adding fun to her many adventures. As the year comes to an end, Rebel seems to have kicked Jacob out of her feed and it was confirmed by January 2021 that things were over for Jacob and Rebel. Brad Pitt and the German model, Nicole Poturalski, have dated privately for months in 2020. Sources say that the actor has kept their relationship out of the spotlight to maintain a good relationship with his ex-wife, Angelina Jolie. Their secret relationship did not last long as, and by October, things between them were over. Miley Cyrus’s photographs with Kaitlyn Carter concluded Miley’s marriage with Liam Hemsworth in 2019. As things got pretty fast with the pair, their split, which was predicted, came next. Their relationship lasted for only a month as Miley resumed dating men by October 2019.

Blake Lively and Leonardo Di Caprio seem to have a really good time together during their five-month-long relationship in 2011. They were spotted enjoying each other’s company, such as their trip to Disneyland. As fate had it, they broke up and Blake started seeing Green Lantern actor, Ryan Reynolds, by October 2011, whom she eventually got married to. Now, Blake is more than happy to care for their children, who they are probably helping with their online classes due to the current global situation.

When everyone thought that Demi Lovato is about to settle with Marx Ehrich, since they have gotten engaged after nearly six months of dating in 2020, she broke off their engagement. It just doesn’t feel right according to the Skyscraper singer. Bill Hader and Rachel Bilson were a couple back in 2020, but the sooner they made their relationship public, the sooner it ended. The two attended a red carpet event in 2020 and then proclaimed their romantic relationship is over, which ended in July 2020, just two months after they went public. Another unlikely pairing is the badass actress, Michelle Rodriguez, and the High School Musical star, Zac Efron. The two were spotted together on a fun vacation in Italy in July 2014, confirming their romantic involvement. Their polar opposite personality is not to blame for their breakup in August of the same year as Michelle admits that she is fond of being alone. Proving Michelle Rodiguez’s claim that she cannot last long in a relationship is her brief attachment to the model, Cara Delevigne, from January to July 2014. The pair was first spotted in a basketball game, cozy with one another. Apparently, their four-month-long relationship ended when Michelle was spotted being intimate with Zac Efron in July 2014. Proving that Naomi Campbell has not seasoned out is her romantic attachment with the singer, Liam Payne. The two were suspected to be romantically involved over their steamy engagement on Instagram. It was later confirmed that they were dating secretly in late 2018, but their romance was cut short by April as Naomi and Liam’s spark had fizzled out. Another pair that was not meant to last was Joe Jonas and Gigi Hadid, which happened in 2015. We all know that Joe had a past with Taylor Swift and Gigi is among Taylor’s squad – for all its worth, the awkwardness was unimaginable. Apparently, the summer fling was over five months after they began dating. Gigi then jumped to another ex-boy band singer, Zayn Malik, with whom she now has a daughter. She probably won’t have to worry about student loans in the future, given her parent’s celebrity status. Gigi Hadid and Zayn Malik had a turbulent relationship before. Their sporadic dating ended when she met someone else. In summer 2019, Gigi and former Bachelorette star, Tyler Cameron, was seen around New York hanging out together. Although they first claimed to be just friends, Tyler’s presence in the wake of Gigi’s grandmother proves that they were more than friends. Two months after their alleged relationship, Gigi and Tyler are not together anymore as she resumed her romance with Zayn Malik.