Huge Celebrities Spend Big Bucks At Restaurants And We’ve Got Receipts To Prove It! 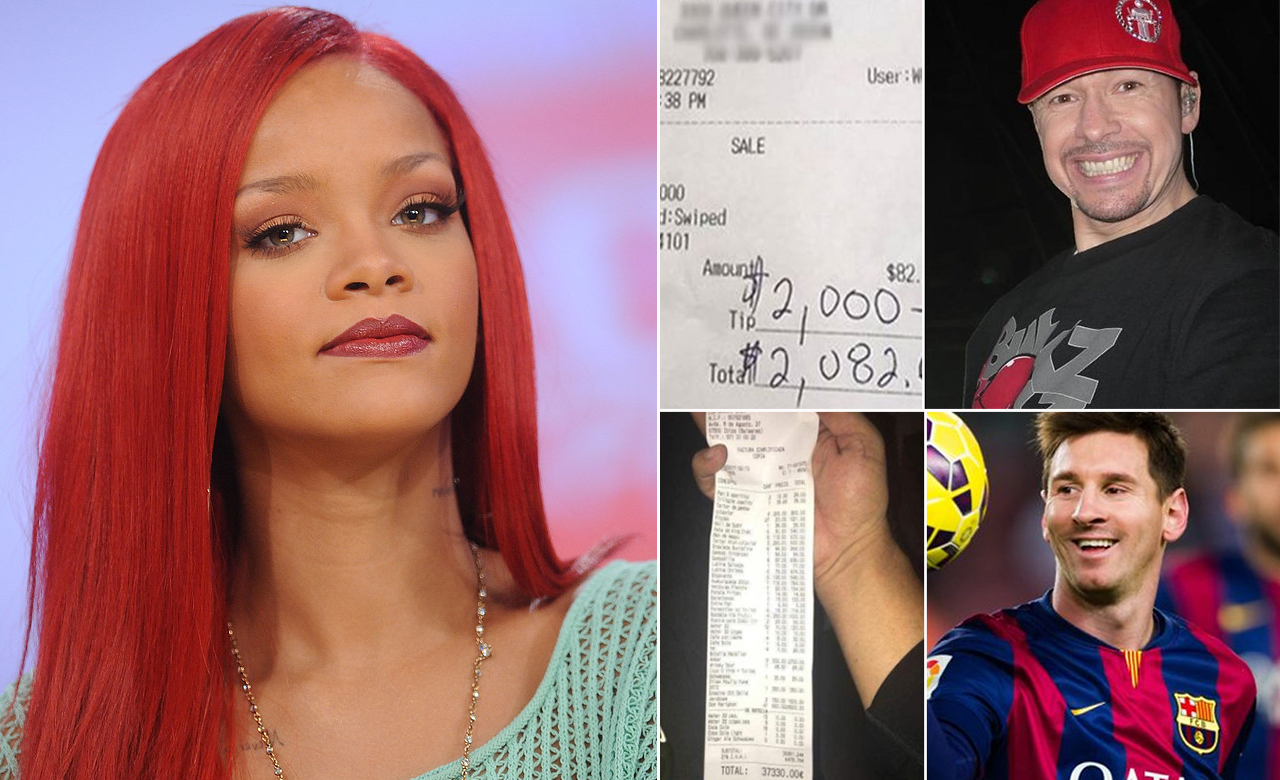 Huge Hollywood celebrities are a group of wealthy people with incredibly jaw-dropping net worths. It comes as no surprise to us who keep 9-to-5 jobs that they all live extravagant and lavish lifestyles. We only ever go to upscale restaurants or high-end bars if we get a huge Christmas bonus or perhaps win the lottery.

However, who hasn’t dreamed of splurging at a fancy restaurant? Well, these superstars are living the dream. They probably have no need for some credit cards in order for them to enjoy an insanely expensive glass of wine and some of the best caviar money can buy. It would be nice to walk into the most elegant restaurant there is and order anything you want off the menu without doing some financial planning on how you are going to pay for it.

Here are some of the biggest celebrities and their jaw-dropping restaurant bills. Singer-songwriter Rihanna is one of the wealthiest musicians in the entertainment industry. She once splurged what seemed like a lot of money for us in one meal. Rihanna snapped a photo of her restaurant bill and then her Snapchat fans started talking about the jaw-dropping receipt. It is probably hard to believe that she would spend $400 for some coleslaw, $700 for some potato salad, and a whopping $8,000 order of grilled lamb for two. The restaurant also charged her $400 for coconut water. It may seem unbelievably ridiculous, however, she does have an estimated net worth of $600 million. Her financial advisor must have told her it was okay to spend those dollar bills like a queen that she is.

Donnie Wahlberg is an American singer-songwriter. He is widely popular as the founding member of the boy band we all loved, New Kids on the Block. Donnie used to be a rebel back when he was still in the nineties boy band. Once, he got in trouble for igniting a puddle of vodka in his hotel room in Kentucky since it burned a small square of carpet and left a mess for the hotel maids to clean up. However, when he was a little bit older. He sort of made amends towards the service industry when he left a $2,000 tip for the employees of Waffle House in North Carolina. After all, who does not love waffles? As of 2021, Donnie has an estimated net worth of $25 million, no wonder he gives away his money like that. He must have a ton of property investments all over the United States now.

Argentine professional footballer Lionel Messi is one of the biggest names in the world of sports. He plays as a forward and is the captain of the national team of Argentina and the Spanish club Barcelona. However, it comes as no surprise that his net worth is already up to $400 million as of 2021. With that being said, Lionel sure is living the lush life, spending his money lavishly. He was once spotted with his now-wife, Antonela Roccuzzo, and numerous other soccer players at Ibiza for a weekend getaway. Incidentally, he posted a photo of him and the group having the time of their lives at the Club Restaurant Cabaret. Since he is so popular, many have seen his post, and eventually, a waiter at the club posted a photo of what he claimed to be Lionel’s $45,000 receipt and it was all for drinks. After the image went viral, the athlete tweeted the next day, saying the receipt was not theirs. However, who else can have that much money at the restaurant at that time? They probably didn’t have to take out their credit cards to pay for it.

These are just some of the richest celebrities who spend thousands of dollars for a meal’s worth of booze and food.